What’s a Gimbal: Everything You Need To Know About Camera Stabilization

Filmmaking has forever been changed, thanks to the gimbal, which sounds like a gift straight from the seventh sky. Who knew that this simple device would create so much chaos amidst the videography world globally, primarily because why didn’t it come sooner?

Contents show
What is a Gimbal?
How does the Gimbal device work?
The incredible science behind the device
Types Of Gimbals
2-axis Gimbal
3-axis Gimbal
What is better: a mechanical stabilizer or a Gimbal?
Conclusion

What is a Gimbal?

Enough with the hype; let us tell you what a gimbal is. But let us give you a hint first. Do you remember those bulky dolly track and Steadicams on set that would cost us way more than several bucks and take an awful amount of space in the storage van? They couldn’t even be operated by a plain old filmmaking enthusiast because it looked like one would need to complete an entire foundations course to get the hang of it and finally get a smooth-sailing video.

This is where a gimbal came to our help. This computer-assisted device put all the dolly tracks to rest because who wouldn’t go running to this way smaller, cheaper, and easier video stabilization device? Essentially, that is what a gimbal does: it stabilizes our videos using smart sensors, so they appear silky smooth instead of giving the illusion that whoever was shooting the video had a horrible ailment that couldn’t let them keep the camera straight for two seconds.

Even better is that gimbals take up way less space and can easily be attached to your camera. They come in two forms: there is a 2-axis gimbal and a three-axis gimbal, both with their own list of advantages and not-so-great qualities, but we will get to that later.

How does the Gimbal device work?

Technology has advanced to a pretty crazy level where one may want to become a robot itself. Take your latest smartphone, for example; the second you pick it up, it lights up because it somehow, without pressing any button, gets the idea that you have picked it up to use it. This is artificial intelligence, and it is exactly how the gimbal works.

You can say that the gimbal has its own brain. Basically, the intelligent motor sensors inside the gimbal utilize artificial intelligence that allows the device to differentiate between intentional movements and not so intentional automatically but please get rid of them movements.

Along with the artificial smarts, the gimbal also has a mount for your camera to be attached and pivots that can help you move the camera smoothly. The pivots have brushless motors to ensure that those adjustments to the camera can be made smoothly and without making any noise. You obviously don’t want to save the video quality at the expense of your sound quality, do you?

The incredible science behind the device 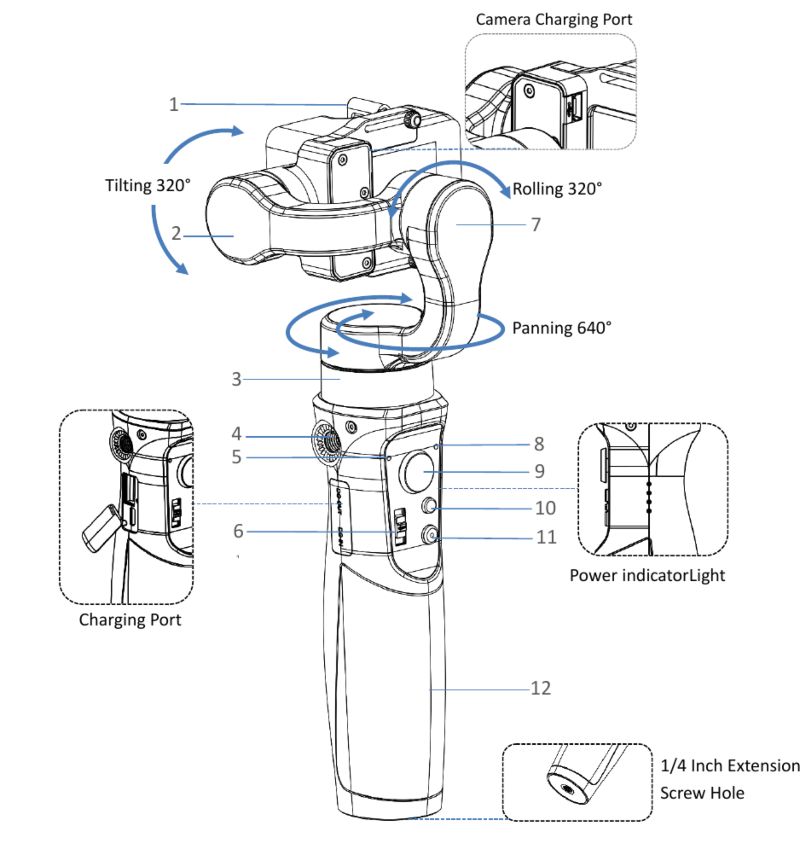 If you still need to understand how the gimbal works, let us explain the technical reasoning behind it. Don’t worry; we will only get into a few technicalities. If you attended your primary school physics class or if you are familiar with using a camera tripod, you would know that there are three directions in which an object can turn around: yaw, pitch, and roll. These are oscillations about the vertical and horizontal axis and rolling over.

Now, these oscillations are coupled with a natural, unavoidable shake if you aren’t using an image stabilization device. What a gimbal does is that it produces an equal movement in the opposite direction: if you naturally yaw to the left, the gimbal yaws to the right. Two opposite movements create a balancing effect, which is no resulting movement. It’s like a weight balance.

These opposite movements are created by an IMU, or ‘inertial measurement unit’. These units are motion sensors that post, detect any movement, and use the inbuilt computer to calculate the exact degree of movement that would be needed on each side in order to counteract the natural movements.

But if those movements are intentional, and the videographer wants them to be a part of the final video, there is no need to fret because, as we mentioned earlier: the gimbal is a smart device. Thanks to the innovative heuristic algorithm, the inbuilt computer easily differentiates between which movement is needed and which movement can be cancelled out. 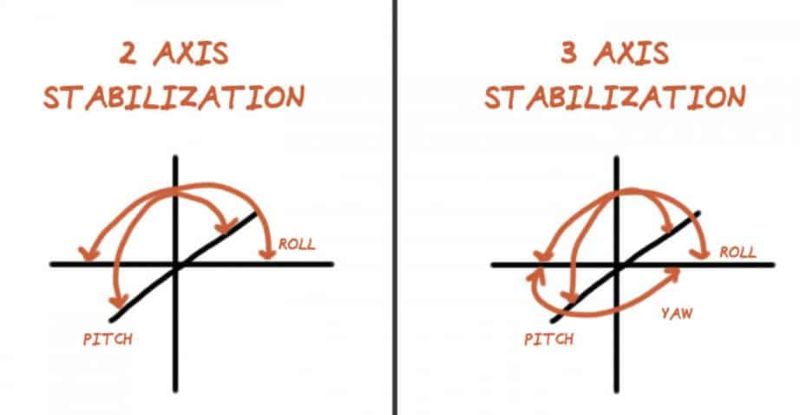 A 2-axis gimbal is just like its name: it produces opposite movements in two directions instead of three. Those movements are on a vertical plain, so as long as you aren’t panning or tilting your camera, you are good to go. Truth be told, controlling the third axis on your own isn’t too hard because our hands have enough strength to control the camera shake from the yaw pivot. Most of our video stabilization issues are solved when the 2-axis gimbal gains control over the forward-backwards pitch and side-rolling.

When we were talking about the three directions of movement, we meant the three-axis gimbal. It comes at a comparatively higher cost than the 2-axis gimbal, but when it comes to professional photography, you can’t really underestimate the importance of the third yaw pivot.

However, some people prefer working with a 2-axis gimbal simply because the additional pivot and its motor increase the bulk that, if paired with a drone, leads to decreased flight time. Moreover, the extra pivot consumes more battery which doesn’t bode well for videographers eager to shoot for long hours.

What is better: a mechanical stabilizer or a Gimbal?

Mechanical stabilizers, most commonly Steadicams, are bulky video stabilization equipment that is built with several counterweights of all sizes, screws, springs, and every other joint from your toolbox. It’s basically a huge tool to solve a small issue: shoot stable videos.

Gimbals are your dream tool: motorized, easy to handle, and extremely easy to store. But here is the thing: they aren’t built for heavy film equipment. Traditional filmmaking equipment, including the cameras, is large and heavy, which means that the gimbal will give up before the shooting ends.

But the camera industry also manufactures smaller versions of mechanical stabilizers for mobiles and GoPro devices. As long as one knows the right technique to manoeuvre them skillfully, they work well. However, they are almost obsolete as the modern generation is heavily leaning towards lightweight motorized gimbals.

Gimbals are the perfect accessory for anyone with a recording device and a passion for shooting silky-smooth footage. They are easy to pair, relatively inexpensive on the pockets and offer a smart user interface which makes the recording process easy and breezy. If anything, using a gimbal makes you fall in love with the art of videography and fuels you to creatively record every enjoyable moment for keepsakes.